Production of animal proteins and cells through culture methods have been developed to reduce the impact of livestock and poultry industries on the environment, animal ethics, and human health.

The goal of cellular agriculture is to provide animal proteins through sustainable production with minimal resource input and environmental impact.

Both acellular and cellular products are being produced through cellular agriculture methods.Livestock emerges as one of the direct emissions contributors of global greenhouse gasses about 10%-12%. This matter is also getting serious when massive efforts to feed people every day with livestock products increase as the world population becomes greater. Global demand for meat has tripled over the past 50 years, reaching 340 million tons in 2018. Providing food for an increasing population will be a great challenge that coincides with the pressure to reduce negative environmental impacts of conventional agriculture.These two are among many reasons behind the first coining of cellular agriculture in 2015.

Cellular Agriculture In a nutshell:

Cellular agriculture refers to the production of animal products through culturing methods. These products include whole cell (cellular product) and also animal biomolecules, such as proteins and fats (acellular product). Cellular products encompass tissue engineering, and cultivated or cultured meat.

Deep Dive: What is cellular agriculture?

This is how cellular agriculture offers a solution

Cellular agriculture is a new application of producing agricultural products such as food or materials via bioprocessing methods in the laboratory. It can be any product like eggs, meat, milk, and many more. Through cellular agriculture products such as laboratory grown meat, the world saves 99% land, 82-96% water, and 7-45% energy compared to raising livestock. In this new innovative method, we can address the food shortage to feed the growing population of the world.

There are several companies which produce cellular meat (CM) worldwide. Among the highest profile in the US are Memphis Meats, who were the first CM company. Others include Mission Barns, Wild Type, and Bluefin tuna-focused Finless Foods in America and Mosa Meat (Netherlands), Meatable (Netherlands) , Future Meat Technologies and Aleph Farms (Israel), Integriculture (Japan), Shiok Meats (Singapore), and Appleton Meats (Canada).

In making cheese, acellular products include casein, a milk protein, and vanillin, an ingredient for making cheese.

Production of milk protein can be achieved through recombinant DNA technology. Microbes such as yeast can be engineered to produce casein, chymosin, and kinase which are important in the production of cheese.

Acellular agriculture falls under the general niche of cellular agriculture, which is the production of animal-based products in a lab environment. As opposed to taking resources like milk directly from the cow, acellular agriculture allows us to utilize the process of fermentation. Fermentation process is utilized to maintain the ideal parameters for protein production. These proteins are then purified and used to create products such as cheese, milk, or any other dairy product. 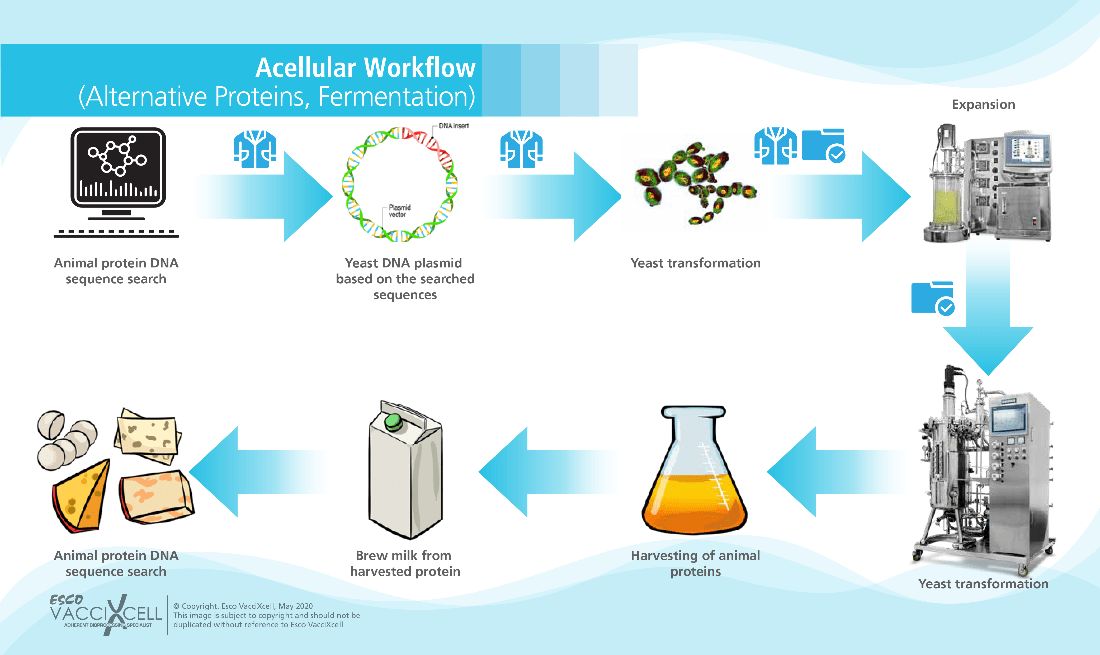 One of the important milk proteins of an important source for babies is breast milk. Breast Milk contains immunoglobulins that is one of a crucial immune protective component. Babies who are breastfed have a passive immunity for longer.

Although no one can deny the benefits of breastfeeding, some mothers encounter challenges related to it including bleeding, sore nipples, cluster feeding, and poor attachment. This forces them to resort to artificial and commercial milk sourced from animals that are not of the same value with human breast milk. Sugars, fats, and immune cells are lacking in current commercial formulas. Human milk also varies for each mother, and thus each baby has its own customized milk. Previous infection of the mother can generate antibodies that studies have found to pass to her milk, including COVID-19 infection as some studies suggest.

Aside from breastfeeding concerns, milk from cows is sourced from cattle farming which can be difficult to achieve under high-temperature regions such as the tropics. Also, contaminants may be found in the milk when antibiotics are used for treating mammary glands infection. Other alternatives such as plant-derived products have been in development but may not have the nutritional content that is needed for babies.

Challenges of this novel dairy milk production include manufacturing consistent composition in terms of production for the dairy market as well as quality monitoring different from the current QC techniques for dairy products. To help the cellular agriculture industry, incubator programs such as Milk Cubator, by Pascual Innoventures, have been launched targeting innovation by start-ups. These start-ups would have access to food experts as well as established facilities to ramp up product and technology development.

Aside from cell-based dairy products, other technologies such as Moolec Science hybrid plant and cell-based proteins are also entering the development of animal-free dairy and egg options. They use genetic engineering of animal proteins into crops that would be grown and harvested for a carbon-neutral and animal-free process.

Cellular products include tissue engineering, and cultivated or cultured meat.

Cultured meat refers to the application of cultured methods to produce muscles that are rich in protein for human consumption.

Tissue engineering methods have been used to culture muscle cells mimicking in vivo environments. A scaffold is required to allow adhesion, proliferation and maturation of the muscle cells. For non-edible scaffolds, however, cultured muscle cells are separated first prior to harvesting; since this procedure might damage the muscle cells, protective techniques such as thermoresponsive coatings are used. 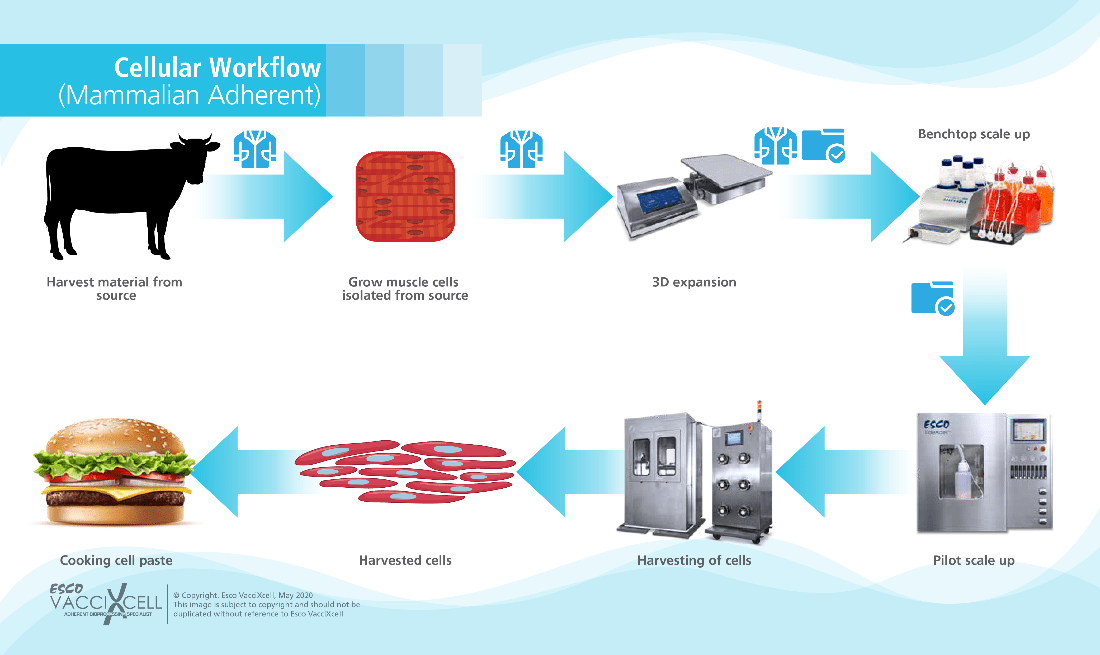 Cellular agriculture is the production of food products with the use of cell cultures. Instead of raising livestock and animal slaughter. Scientists can grow animal products in the laboratory through cell cultures. Through biopsy, we can collect any cell from animals. These cells can be programmed as iPScs which differentiated into muscle cells and other cell types. It can be a mixture of cells depending on how the meat shall be designed and developed.

Figure 1. Cell samples obtained from animals can be differentiated into different cell lines. One of these cells is induced pluripotent stem cells (iPSCs). Laboratory grown meat can be sourced from the cells of a chicken, cow, ducks, pig or any other desired animal.

TideXCell® is equipped with BioNOC II® macrocarriers, where desired cells can be proliferated to maximum. By starving the stem cells through 100% media exchange, they differentiate, maturing into skeletal muscle cells that then merge into primitive fibers.

The advantages of cultured meat are plentiful. It is much more sustainable than traditional factory farming because it doesn't require the use of land or water resources, it's cheaper than most meats on the market today (it's estimated that cultured beef will be priced at $2 per pound) which means people from all walks of life will be able to afford it, and it has potential to end world hunger.

Still, there are several factors to be considered as to whether one will accept or reject cultured meat. Consumer’s perception is still debating the ethical, naturalness, and religious considerations for eating cultured meat.

A variety of methods can be done for scaling up cellular agriculture products from benchtop to pilot and manufacturing scales. Esco VacciXcell Tide Motion bioreactors have the capability to provide an end-to-end process without compromising the quality and quantity of these cultured meat. For laboratory scale we have CelCradle® and TideXcell® for pilot and manufacturing scale. These tide motion bioreactors are equipped with BioNOC II® macrocarriers, where desired cells can be proliferated into maximum density. By starving the stem cells through 100% media exchange, they differentiate, maturing into skeletal muscle cells that then merge into primitive cells. Figure 2. An example of scale-up strategy for IPSCs based meat products. iPSCs derived cells were expanded in T-flask to determine an appropriate seeding density for BioNOC II® in CeXrocker™ with an appropriate culture media to keep its pluripotency. When the target number of cells is achieved, it will be transferred and expanded in the CelCradle® system.